Leo Tolstoy understood whist players. I feel certain he would recognize them in the modern bridge player. Here is a passage from the Death of Ivan Ilych (1886). Death happens but the players think of the game, its pleasures not to be delayed.

The dead man lay, as dead men always lie, in a specially heavy way, his rigid limbs sunk in the soft cushions of the coffin, with the head forever bowed on the pillow. His yellow waxen brow with bald patches over his sunken temples was thrust up in the way peculiar to the dead, the protruding nose seeming to press on the upper lip. He was much changed and grown even thinner since Peter Ivanovich had last seen him, but, as is always the case with the dead, his face was handsomer and above all more dignified than when he was alive. The expression on the face said that what was necessary had been accomplished, and accomplished rightly. Besides this there was in that expression a reproach and a warning to the living. This warning seemed to Peter Ivanovich out of place, or at least not applicable to him. He felt a certain discomfort and so he hurriedly crossed himself once more and turned and went out of the door — too hurriedly and too regardless of propriety, as he himself was aware.

Schwartz was waiting for him in the adjoining room with legs spread wide apart and both hands toying with his top-hat behind his back. The mere sight of that playful, well-groomed, and elegant figure refreshed Peter Ivanovich. He felt that Schwartz was above all these happenings and would not surrender to any depressing influences. His very look said that this incident of a church service for Ivan Ilych could not be a sufficient reason for infringing the order of the session — in other words, that it would certainly not prevent his unwrapping a new pack of cards and shuffling them that evening while a footman placed fresh candles on the table: in fact, that there was no reason for supposing that this incident would hinder their spending the evening agreeably. Indeed he said this in a whisper as Peter Ivanovich passed him, proposing that they should meet for a game at Fedor Vasilievich's. But apparently Peter Ivanovich was not destined to play bridge that evening. Praskovya Fedorovna (a short, fat woman who despite all efforts to the contrary had continued to broaden steadily from her shoulders downwards and who had the same extraordinarily arched eyebrows as the lady who had been standing by the coffin), dressed all in black, her head covered with lace, came out of her own room with some other ladies, conducted them to the room where the dead body lay, and said: “The service will begin immediately. Please go in.”

Schwartz, making an indefinite bow, stood still, evidently neither accepting nor declining this invitation. Praskovya Fedorovna recognizing Peter Ivanovich, sighed, went close up to him, took his hand, and said: “I know you were a true friend to Ivan Ilych…” and looked at him awaiting some suitable response. And Peter Ivanovich knew that, just as it had been the right thing to cross himself in that room, so what he had to do here was to press her hand, sigh, and say, “Believe me…” So he did all this and as he did it felt that the desired result had been achieved: that both he and she were touched.

“Come with me. I want to speak to you before it begins,” said the widow. “Give me your arm.”

“That does for our bridge! Don't object if we find another player. Perhaps you can cut in when you do escape,” said his playful look. 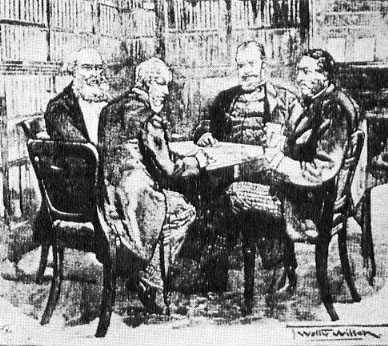 Here is how Ivan Ilych gets started in a life of bridge:

On taking up the post of examining magistrate in a new town, he made new acquaintances and connexions, placed himself on a new footing and assumed a somewhat different tone. He took up an attitude of rather dignified aloofness towards the provincial authorities, but picked out the best circle of legal gentlemen and wealthy gentry living in the town and assumed a tone of slight dissatisfaction with the government, of moderate liberalism, and of enlightened citizenship. At the same time, without at all altering the elegance of his toilet, he ceased shaving his chin and allowed his beard to grow as it pleased.

Ivan Ilych settled down very pleasantly in this new town. The society there, which inclined towards opposition to the governor was friendly, his salary was larger, and he began to play vint [a form of bridge], which he found added not a little to the pleasure of life, for he had a capacity for cards, played good-humouredly, and calculated rapidly and astutely, so that he usually won.

A preference for bridge

…After dinner, if they had no visitors, Ivan Ilych sometimes read a book that was being much discussed at the time, and in the evening settled down to work, that is, read official papers, compared the depositions of witnesses, and noted paragraphs of the Code applying to them. This was neither dull nor amusing. It was dull when he might have been playing bridge, but if no bridge was available it was at any rate better than doing nothing or sitting with his wife…

The pleasures connected with his work were pleasures of ambition; his social pleasures were those of vanity; but Ivan Ilych’s greatest pleasure was playing bridge. He acknowledged that whatever disagreeable incident happened in his life, the pleasure that beamed like a ray of light above everything else was to sit down to bridge with good players, not noisy partners, and of course to four-handed bridge (with five players it was annoying to have to stand out, though one pretended not to mind), to play a clever and serious game (when the cards allowed it) and then to have supper and drink a glass of wine. After a game of bridge, especially if he had won a little (to win a large sum was unpleasant), Ivan Ilych went to bed in a specially good humour.

The pain of holding poor cards

The pain did not grow less, but Ivan Ilych made efforts to force himself to think that he was better. And he could do this so long as nothing agitated him. But as soon as he had any unpleasantness with his wife, any lack of success in his official work, or held bad cards at bridge, he was at once acutely sensible of his disease. He had formerly borne such mischances, hoping soon to adjust what was wrong, to master it and attain success, or make a grand slam. But now every mischance upset him and plunged him into despair. He would say to himself: “there now, just as I was beginning to get better and the medicine had begun to take effect, comes this accursed misfortune, or unpleasantness…”

… Her [his wife’s] attitude was this: “You know,” she would say to her friends, “Ivan Ilych can’t do as other people do, and keep to the treatment prescribed for him. One day he’ll take his drops and keep strictly to his diet and go to bed in good time, but the next day unless I watch him he’ll suddenly forget his medicine, eat sturgeon — which is forbidden — and sit up playing cards till one o’clock in the morning.”