However, despite the detailed documentation, using ACBLmerge requires some computer expertise because it is a command line based program. I have long wanted to add a graphical user interface (GUI) or create a website where a director or club manager could upload their input files and have everything else taken care of automatically. But adding a GUI to a Perl programs is a bit cumbersome, far less enjoyable than adding new features. And while I understand the basics of web forms there are many web front-end details I would have to come up to speed on. Fortunately others are experts on these things.

Philippe Lamoise is a fellow San Diego bridge player with web development expertise. For the last several months he has been creating the Bridge Results website. At the same time I have made improvements to ACBLmerge to better integrate with Bridge Results. The resulting website can support clubs, both large and small, and tournaments of any size.

Every club or tournament has a calendar on which the club manager or a tournament official can define events, possibly several per day. For example, click to see March calendar for the Esplanade Bridge Club. A partial screenshot appears below. 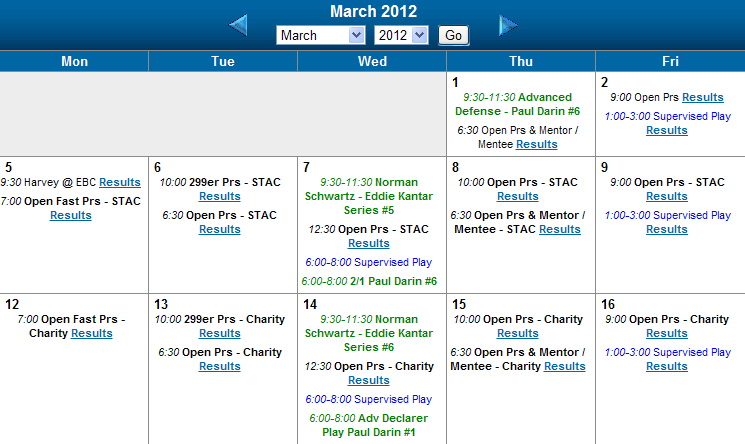 To view a game result generated by ACBLmerge, a player just clicks on a Results link. The month and year to view can be changed at the top of the calendar. Pressing the Go button then changes to the desired month. The calendar can also be viewed in other formats. The List view is well suited to large tournaments such as regionals and nationals. A partial screenshot of this format is shown below. 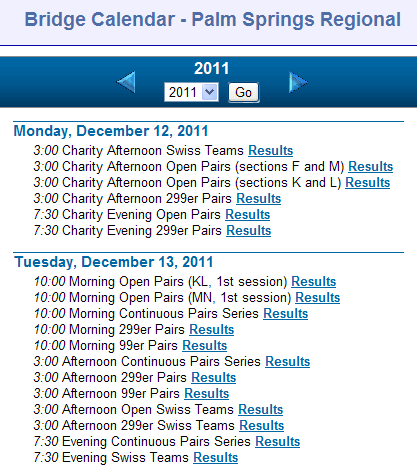 Each club or tournament has its own account on Bridge Results. Defaults for many ACBLmerge settings can be set through an administrative console. See the partial screenshot below. 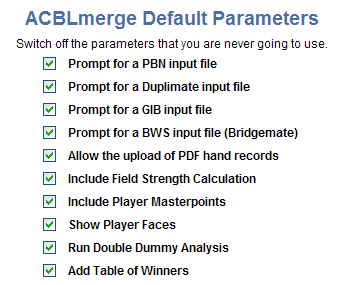 In addition to the Face View and Masterpoint Tooltip features of ACBLmerge, a link will appear under a player’s name when the mouse cursor is placed over a name. Clicking on the player’s name, takes you to a player page as shown in the screenshot below, where I have truncated the full list of sessions. Click for the full live example. 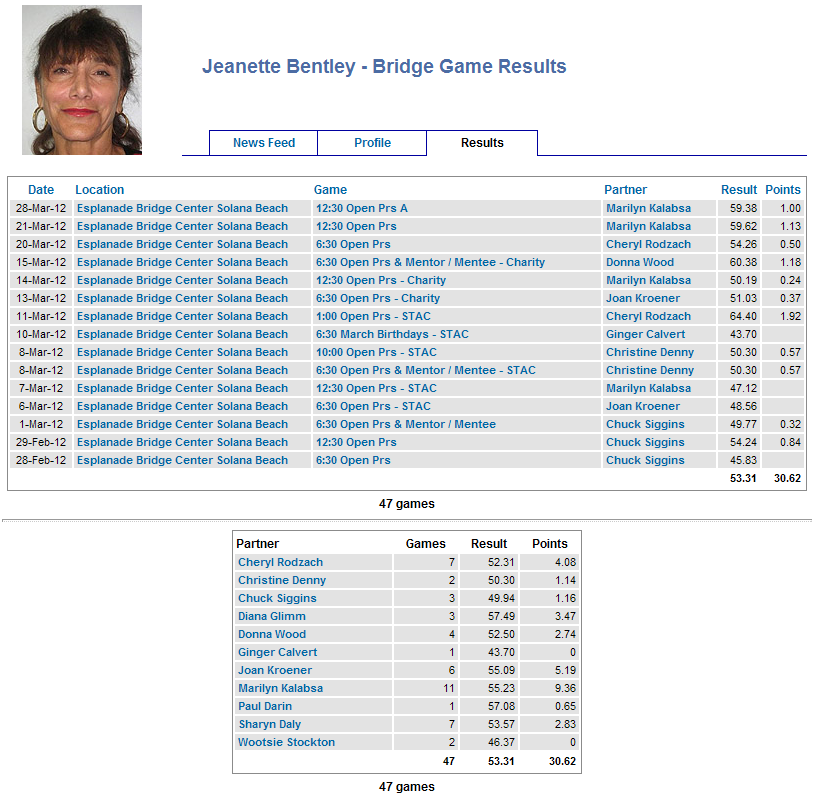 Results are tracked across all clubs and tournaments that use Bridge Results. The example below shows results from the Esplanade Bridge Center, Adventures in Bridge, and the Palm Springs regional. 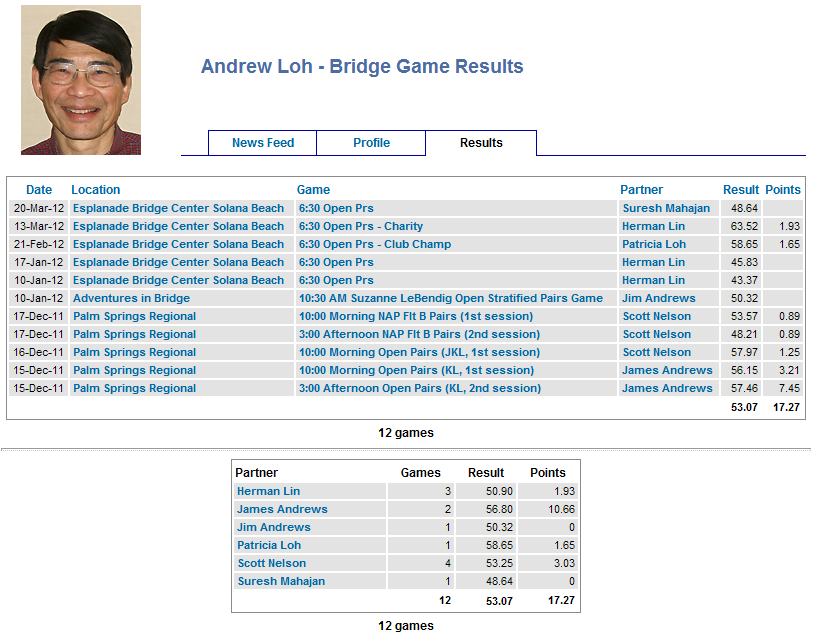 Notice that each player page has three tabs: News Feed, Profile, and Results. 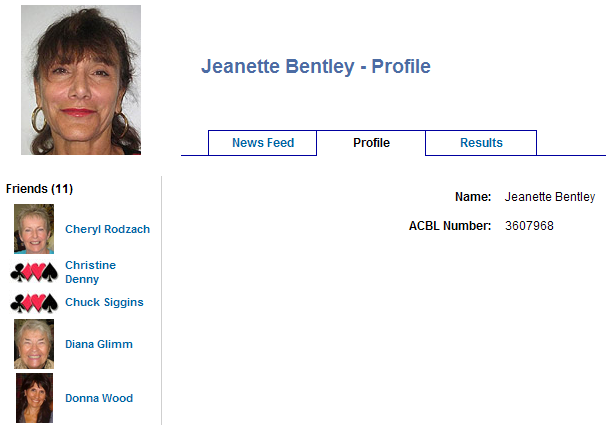 The Newsfeed tab is a similar to the Facebook Wall. It shows recent results for the player and the player’s friends. The Profile tab shows information about the player, currently just their player number.

When either the News Feed or Profile tab is selected, the left side of the page show the player’s “friends”. Initially “friends” is defined as bridge partners. But when a player is logged in, they can add other players as friends using the button shown at the right. Clicking on a friend takes you to the player page for the friend.

If a player is logged in, they may post a message on their news feed or the news feed of another player.

Logged in players may also add a picture or change their picture by clicking on the My Photo button. (Initially, player faces were populated using an existing set of about 500 faces.)

Interested in using Bridge Results for your club or tournament?

If you are interested in using bridge results for your club, contact Philippe Lamoise. He is offering free trial periods. Longer term he is considering charging a subscription fee of about $120 / year for large clubs and substantially less for small clubs. These fees will offset the cost of webhosting and continued development.

ACBLmerge will remain an open source program. The manner in which it integrates with Bridge Results is general. If you wish to create develop a website similar to Bridge Results, the ACBLmerge website integration features will work for you too.

Comparison of Bridge Results and the ACBL Club Results service

The ACBL provides a free service called Club Results that allows clubs to post their results on the ACBL website. Clubs can register to use the service (read the manual). I think Club Results is a great idea, perhaps the best ACBL digital initiative, though I’ve heard reports that sadly it is not getting much use.

Most importantly Bridge Results has the freedom to operate and innovate. Philippe Lamoise and I are a two man team. We do not have to seek approval from several levels of committees. We are here now, eager to make improvements, and keen to listen to suggestions.