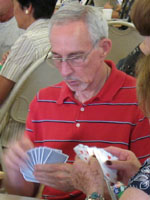 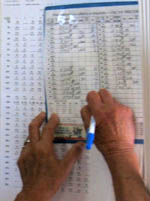 Welcome to the website for ACBL Unit 526 (U526). We are the La Jolla and Beach Unit in District 22 (D22) of the American Contract Bridge League (ACBL). Our games are held at 1 PM on the second and fourth Sundays of each month at the Soledad Club at 5050 Soledad Road in Pacific Beach (See also the Interactive Google Map of major San Diego clubs). We tradeoff the occasional fifth Sunday with San Diego Unit 539. If you play bridge but are unfamiliar with duplicate (tournament) play, check out Karen Walker’s introduction. Completely new to the game? Check out the ACBL’s Learn to Play web page.

The unit games are cancelled indefinitely. The city of San Diego, which owns the Soledad Club, has closed it for all activities.

The ACBL has cancelled the national in Columbus, Ohio. The San Diego regional cancellation notice went out on March 21st.

The Adventures in Bridge diaspora

The 2019 club table counts are final. This means we can examine the impact of the collapse of Adventures in Bridge (AIB) in March of last year when the San Diego Fire Marshall raided the club in the middle of game and declared it 4x over capacity, an incident motivated by a dispute with a nearby business over the shared parking. AIB, which consistently had 8,000–10,000 tables for more than a decade, ended 2019 with 2,000 tables, a year-over-year drop of 6,800.

Kathie Angione and John Lagodimos added Thursday and Friday games to their second club, the San Diego Bridge Club, growing their table count from a tiny 253 to 1663, picking up more than 1,400 tables. The San Diego Bridge Academy grew by 1,000 tables. The Soledad Club added a sanctioned game on Wednesdays and saw its table count table double, increasing by 800 tables. The Bridge Club of North County in Escondido grew 600 tables though it is not entirely clear how much of this is due to the AIB diaspora. The La Jolla unit game grew about 100 tables while the San Diego unit game was down slightly after relocating to the Soledad Club. But all said and done, about 3,000 tables simply vanished.

Also of note, there was no change in table count for the La Jolla Beach and Tennis Club, Kathie Angione’s original Eastlake Club, Harvey’s bridge, and the various small clubs the Ida Burcham directs in north county.

The repercussions of the AIB collapse rate to be long term. Anecdotally, it seems that the experienced players shifted from AIB to other clubs and the less experienced players stopped playing. Moreover, AIB had the largest teaching program, picking up many recent retirees.

AIB could be the last big club in the San Diego area. Rising rents and increasing development in San Diego are making it very difficult to find a reasonably central location that is both affordable and has enough parking for a full time facility. San Diego clubs are now piggybacking off of city owned property, Masonic lodges, and religious organizations. Card fees are pushing up to $12 / session. Most of the players can afford the increase but some may shift to online bridge or hold out for sectionals and regionals which comparatively speaking may not be more expensive.

2019 Mini-McKenney and Ace of Clubs results

Starting in February, clubs (and units) must upload their results through ACBL Live for Clubs. February 9th was our first use of the system, with results e-mailed to subscribing players within two minutes of the upload at 4:40 pm, immediately after the game. However, we will continue posting results on the unit website because the ACBLmerge results presentation has some advantages over the ACBL Live for Clubs presentation.

All the unit game ACBL Live results are here. Choose the Links → ACBL Live menu at the top of the unit website to find the ACBL Live pages for other local clubs.

Overall I think ACBL Live for Clubs is a big achievement for the ACBL. I have posted a long article on Bridge Winners about ACBL Live for Clubs and what I perceive to be its shortcomings. I arranged a teleconference with the ACBL shortly after the fall NABC. They seemed receptive to implementing many of my suggestions but are fighting fires from the ACBL Live transition that will tie them up through the spring NABC in March. In all likelihood, the unit will continue to post ACBLmerge results well into 2020.

If you are interested in ACBL demographics, take a look at Club Table Counts Revisited. You can even download the data and crunch the numbers yourself.

*Corrected March 8th at 9 pm. There was a puzzling inconsistency between a contract and side it was scored on for board 1 which does not seem to be a data entry mistake. This has been corrected on the unit website and the correction will be pushed to ACBL Live later. The change has a small impact on the masterpoint awards, primarily moving Deborah Goldsmith and Joseph Rubin up two ranks.

**Corrected February 24, 2020 at 3 pm. Boards 19, 23, and 24 all had a single scoring error. Board 19 had a 140 scored on the wrong side and boards 23 and 24 both had incorrect contracts on the same round, clearly a tablet user error. These results slightly shuffle the lower ranking winners and edge Randall Dougherty and Lynne Newman on to the list of masterpoint winners.

What is the worth of AKQxxx? — a geeky tale of probability and simulation.

Days of Thunder, a review and discussion of Eric Rodwell’s The Rodwell Files: Secrets of a Bridge Champion and a close look at one of the many fascinating hands presented therein.

ACBLmerge 1.3.5 was released on November 19, 2014. It adds full support for Mac OS X. ACBLmerge 1.3.4 was released on November 7, 2014. This is primarily a bug fix release, including the fix of several bugs in the par calculation. Double dummy calculation is now faster and clicking on a board number in the recap sheet navigates to that hand in the main report. Read more.

Since December 2011, Philippe Lamoise, a bridge player in the North County unit, has been developing the Bridge Results website and I have been making many improvements to ACBLmerge to integrate with the functionality provided by his website. Now it is easy for club directors, club managers, and tournament officials to upload game results using a web interface without knowing anything about running ACBLmerge. Read more about Bridge Results.

Programmers may be interested in the more recent ACBLgamedump utility for directly reading ACBLscore game files, based on the ACBLscore game file format documentation (reverse engineered). This utility is tied to the future of ACBLmerge and has been used by Bridge Results in recent times to generate de novo reports.

Contacts and Board Information

E-mail the Webmaster, E-mail the La Jolla Board, Contact a board member, Board Members, Governance, Minutes, Financials

Find news that has migrated off the homepage on the Table Talk page or the Youth Teaching and Masterpoint Notes blogs. Unit News published in the Contract Bridge Forum is also available on our website. The Education & Resources page contains many links to rules and regulations, San Diego players, bidding and card play, online play, and even a bit of humor. The Free Bridge Software page has descriptions and links to some great free programs. The Analysis Projects page links to some in-depth analyses of bridge data, including the The Payoff Matrix.

, 1.6 MB) from the ACBL Bulletin explains how to fill out a Convention Card accurately. Unlike the version on the ACBL website, our version has the entire series in a single document, complete with an index.

If you encounter a Zero Tolerance incident at our unit game or any of the clubs within our unit, please fill out our U526 Zero Tolerance form and return it to Bill Grant, our unit recorder.

He is baaaack! Or at least his website is. The webhosting contract for Marvin’s original website lapsed in 2015, a few months after his death. Shortly after Evan Bailey passed away I told Marvin that I had vacuumed up a copy of Evan’s website so that I could re-host it after the webhosting contract lapsed. Marvin was happy to hear that and hoped I would do the same for him after he “kicked the bucket.” So here you go, Marvin!